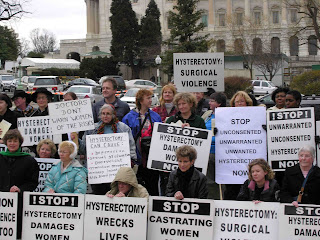 One of the common myths perpetuated by doctors that has become folklore is that the female organs are only needed by women who want to have children and that after they complete their family they no longer need these organs. Nothing could be further from the truth. The uterus is a hormone responsive reproductive sex organ that supports the bladder and the bowel. It functions all of a woman’s life. Many women are sexually active and experience uterine orgasm into their 80’s.

In a HERS Foundation survey 99.7% of women reported that the doctor who performed the surgery did not inform them of the consequences or they were lied to when they asked if they would experience any changes. Most often doctors tell women “You’ll be better than ever” and “Sex will be the same or better”.

Because doctors are not informing women of the adverse effects of hysterectomy the HERS Foundation has launched a campaign to compel every doctor to provide HERS short new educational video “Female Anatomy: the Functions of the Female Organs” to every woman before she is asked to sign a Hysterectomy Consent Form.

SIGN THE PETITON at www.ipetitions.com/petition/saynotilyouknow or by visit www.hersfoundation.org and click on “Petition”. It’s every woman’s right to know.